4 Main Parts of a Computer 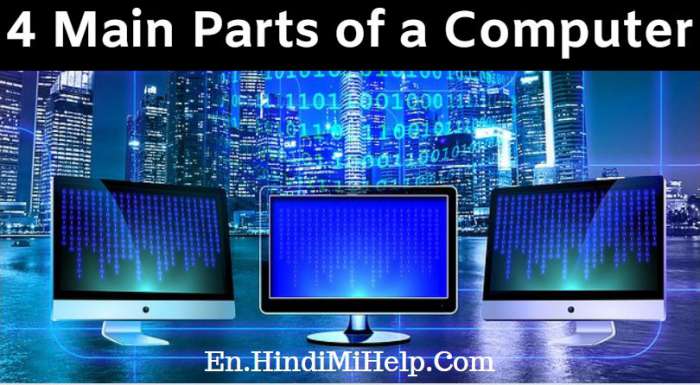 First friends, you need to know what is a computer?

As you know that computer has been a very important contributor in all areas of the development of humanity. Computer is a device through which complex problems can be solved easily and many impossible tasks can also be made possible.

Friends computer is an automated electronic machine in which we can transform them into meaningful information by controlling the program by giving sophisticated data.

In fact, the original purpose of the invention of the computer was to manufacture an early calculating machine, hence it cannot be defined.

The main four parts of a computer:

Friends first of all know what is a Monitor?

So let’s understand this with an example. So guys, as we are watching a video in the CPU, the monitor is used to show it as an image for our eyes to see.

At present, various developed generations of monitors are also available. In which we are given many more facilities.

Now let’s talk about CPU, what is CPU? And what does it do?

The CPU occupies an important place in the computer and is a core part of the computer that performs various functions such as mathematical, statistics, or programs. Through which we can do different types of work.

The function of the Friends CPU is to operate a variety of action methods and programs. Which are operated by us. Apart from this, it has many other functions. We will discuss these later.

So let’s understand this with an example. If we want to create an image, we use paint and during this process we carry out various actions of paint and create a well-successful image in this entire All actions in the process are handled by the CPU itself and are well shown to us in the monitor as an image. Thus the CPU functions for the operation of various work methods.

Now friends talk about the keyboard, what is a keyboard?

Friends, keyboard is the device through which we give different types of directions to the CPU. As we want to write our name, we will instruct the computer to write its name through the keyboard which will be understood by the CPU in statistically form and we will be displayed as spelling our name in the monitor.

Additionally, the keyboard is also used to give a variety of other signals. Which we will discuss later and do a detailed study.

So, friends, let us understand this with an example. As suppose your name is Ram and you want to display your name in computer then you will need a keyboard. In which you will write the spelling of your name and display the spelling in the monitor by understanding the CPU or analyzing it. Thus keyboards are used to indicate different types.

Now friends know what a mouse is?

So friends mouse is the device through which we use to select a subject matter. Which we use to organize or open a folder or any content or in many other activities. It is used by rubbing along a surface. Which can move the mouse cursor up and down. And we are able to choose the desired folder or subject matter, we will learn more about it later.

So let’s understand this with an example. As you want to open a folder, you will point the mouse towards that folder or move the mouse cursor to that folder and double click that folder will open. And you will be able to open that folder. Thus, the mouse is thus used in computers.

Additionally, if you want to move a content from one place to another, you will select that content and can drag it to another folder or another location by dragging it with the mouse cursor.

In today’s post you learned what are the important 4 parts of computer (4 Main Parts of a Computer)? And what is computer? What is a monitor? ⇒What is CPU? What is a keyboard? ⇒What is a mouse? And understood his working method very well. If you like this post, then share it with your friends and make your valuable suggestions in the comments. Stay connected with our website as well. 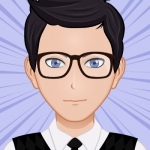